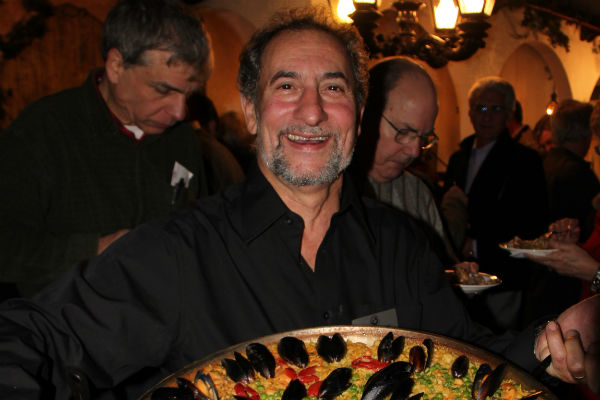 Carlos Rivero, Valparaiso's modern "Don Quixote," rode to the cause of helping the homeless in Porter County, when he opened his Don Quijote Ristorante in Valparaiso on Sunday, November 11 to benefit the charity. From 12 Noon to 5:00 PM, some 400 supporters paying $35.00 each, enjoyed an open buffet that included some of the restaurant's finest entrees.

The restaurant and entire meal was then contributed by Rivero to Housing Opportunities, Inc., a residence for homeless men, women and children in Valparaiso. Caroline Shook, CEO of the full service agency says, "In 2011, this agency served some 4900 needy individuals with housing and medical care, with 47 percent of them being children." Formerly known as Spring Valley Shelter up until three years ago, the agency has held this fund raiser at Don Quijote for the past 21 years.

Grace Watkins, a Spanish teacher at Valparaiso High School has been supplying high school students from her Spanish classes every year to the project since the it began in 1990. Watkins says, "These energetic students would sell tickets, solicit gifts from Valparaiso area businesses and serve as waiters and waitresses at the benefit dinner."

The 17th century's Don Quixote was a Knight in the Spanish Templar and a folk hero of Spain who set out to start an age of chivalry and humanity in Europe. Implicit in his dream was the desire to be seen as a chivalrous hero who addressed injustices and protected the needy of the time. That included his working to improve the plight of "damsels in distress," widows and orphans. Carlos Rivero is Valparaiso's modern day "knight in shining armor" who takes on that aura by using his talents as a chef to protect and support the needy of this area.

Shook says, "This benefit has raised $20,000, and for his generous contribution, Housing Opportunity, Inc. has awarded Rivero its 2012 Angel of the Year!" Rivero says, "I am happy and honored to be a partner in this project."

For additional information about Don Quijote Ristorante, log on to www.donquijoterestaurantandimports.com

For additional information about Housing Opportunities, Inc. log on to housing-opportunities.com