If you are a sports fan, this is a pretty incredible weekend coming up in Valpo with great events going on all over the place. I continue to see every day, that even for those folks that are not sports junkies, there are good lessons to be learned from those in the sporting world, whether we are parents, kids, educators, business leaders, or just folks trying to live their life the right way and make the best of the god-given abilities, no matter their walk in life. 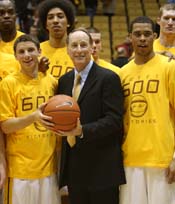 Events kick off tonight with VU Hoops Mania going on at the ARC at 6:30pm

Fans are invited to get their first glimpse of the 2009-2010 Valparaiso basketball teams at Valpo Hoops Mania presented by Cardinal Bus, to be held Friday, October 23 at the Athletics-Recreation Center. Doors will open at 6:30 p.m., with the main program beginning at 7 p.m. Admission to the event is free.

The annual preseason showcase of the basketball teams will kick off with a performance by the cheerleaders and Crusaderettes, followed by the official introductions of this year’s Crusaders. Each team will have representatives participate in a 3-point contest, followed by brief scrimmages by both squads. Members of the men’s basketball team will then take part in a slam dunk contest, while both teams will be available for an autograph session to close the program.

Typical fall football weather with game time forecast of 51 degrees and rain. Tonight also has the VHS Varsity Football team going against the Merrillville Pirates in the first sectional game of the season. The Vikings have overcome a ton of injuries this season to key players, but still managed to secure 2nd place in the Duneland Athletic Conference for the regular season. It was pretty cool this week to see Coach Hoffman come out to the TJ-BF football game this week and rally the future Vikings, and one of tonight’s many great options can have you making the quick trip out to Merrillville and rooting on Valparaiso High School.

The event is headlined by many legendary figures in Valparaiso basketball history, including Virgil Sweet, Skip Collins, Bryce Drew, Bob Punter, Joe Otis, Homer Drew, Rob Cavanaugh, and John Knauff. Tickets will be available for five dollars each, and proceeds will benefit the Public Education Foundation of Valparaiso. Tickets are $5 each and are available at a bunch of places in town, as well as at the door.

The legends will talk about the history of the program, some of its best moments, and how the program has been able to sustain success over 50 years from the time Virgil Sweet has coached through the new coach, Joe Otis. There will be an open discussion between former coaches (Sweet, Collins, Punter, Drew, and Otis), former players (Drew, Cavanaugh), and a historian in John Knauff, who will soon be releasing a book about the entire history of Valparaiso High School basketball entitled The Green and White.

There are also countless other playoff soccer games, cross country meets, tennis matches, and loads of events going on at the elementary, middle school, high school, and collegiate level. For those involved in any of those games, we wish you a great game/match/meet, we encourage everyone to let the players play, the coaches coach, and never forget that all of these kids are learning as much about life, hard work, team dedication, humility, respect, and having fun competing in a sport that they love, as much as they are about that actual contest.

Coaches like teachers are there to teach us more than just the X’s and O’s, or how to properly write a sentence or complete a math problem. If you have not had a chance to see the videos we have produced on some of the major coaches that have had an influence on many of our young kids, take a few minutes and check some of them out. I know I learned as much from doing the interviews as some of the kids that played for them learned from being on the team.

Videos of Sports Coaches, and Inspirations