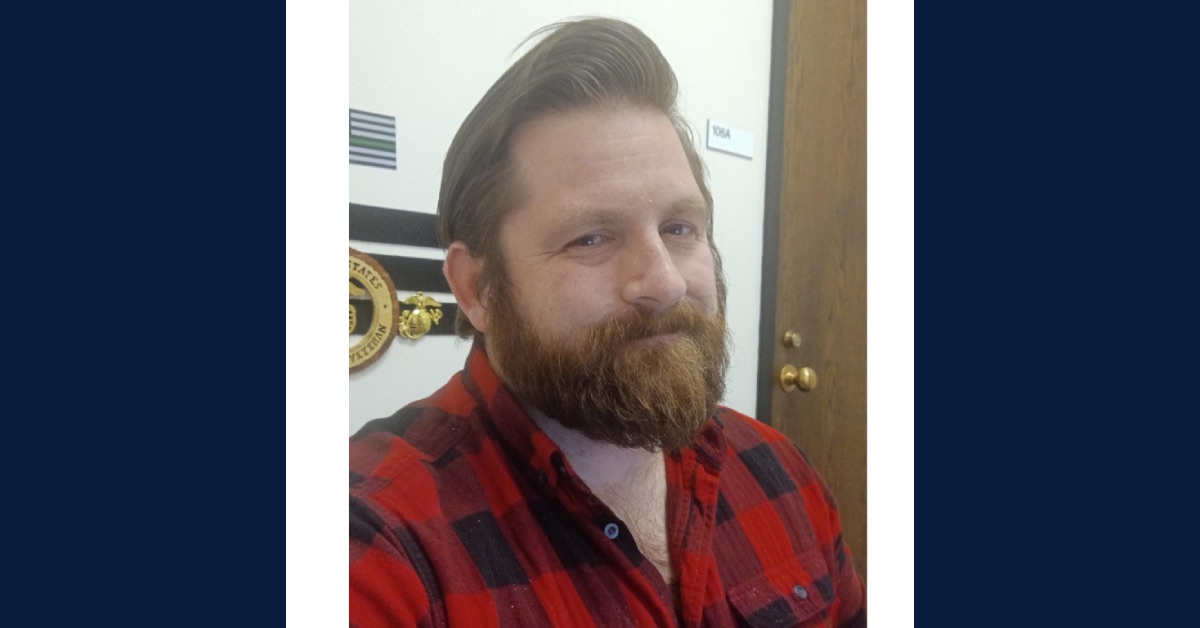 A trucking accident isn’t typically seen as good fortune, but for Dan Riordan, the IU Northwest veterans services coordinator, a collision came with a silver lining. A former U.S. Marine, Riordan had been bouncing from job to job after leaving military service. He had been a janitor, property manager, and a blackjack dealer, all before finding himself in a trucking job.

“I knew I would never quit the job without having another job secured,” Riordan remembered. “The day I started truly thinking about a career change, I happened to get into the accident. For insurance purposes, the company had to let me go, which in the end, instead of feeling trapped, I was freed with that violent accident.”

Before long, Riordan ended up at the door of the Gary Area Vet Center, where they helped him explore his education benefits. He learned he could get his tuition paid for, plus a monthly stipend. But, at first, it felt like completing an undergraduate degree was a no-go.

“I was always a mediocre student,” he said. “But it turns out, you just need proper motivation.”

Riordan enrolled at Indiana University Northwest, and soon became an “A” student in the business administration program. He soon found a mentor in Charles Hobson, a professor in the program and fellow veteran. Riordan knew he could always look to him for encouragement.

From mentee to mentor

Just as Hobson was a mentor to him, Riordan is now a mentor and resource for numerous veterans on the Northwest campus. As the full-time veterans services coordinator, he strives to give people a place where they belong.

“One thing I realized about the veteran community is that we’re scattered—as soon as we get out, we don’t know what to do with ourselves. The best thing we can do is build a community,” he said.

Having struggled with PTSD and depression himself, Riordan knows all too well the challenges of adapting to civilian life. Today, he’s motivated to be part of the solution.

Academic Success and Achievement Programs (ASAP) staff, including Riordan and along with other campus community members, are planning Veterans Week at IU Northwest, a week-long celebration that will highlight local and campus resources for vets, while also giving non-vet students a better understanding of the veteran experience.

“We’re keeping it small this year,” he said. “We have plans of expanding the week once more people know about the many resources available. Right now, it’s all about getting the word out.”

The application process was led by ASAP Program Coordinator Jennifer Rines and Registrar Peter Zachocki, and included input from many others on campus.

It takes a village to care for our veterans, and Riordan is determined to be a part of that village. He said if he doesn’t have the resources a student needs, he can find some one who does. Thanks to a network of vet centers and professionals, Riordan’s office can point those who are struggling in the right direction.

“When a student comes in who’s having a bad time, but feels comfortable talking to me, that’s some rewarding stuff,” Riordan said.

Although Riordan may have found his way to higher education via an accident, his success as veterans services coordinator certainly hasn’t been accidental. As a result of IU Northwest's commitment to the veteran community, Riordan has found his organization on one best-of list, with many more to come.