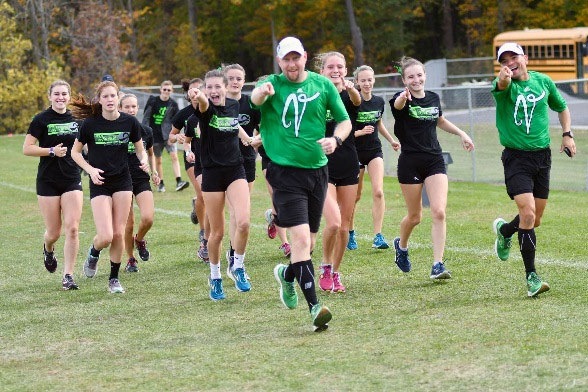 The Valparaiso Vikings take on the Penn Kingsmen in a rematch of week 1 tonight in IHSAA Sectional action. Game time is 6:30 PM. All spectators Kindergarten and up must have a ticket. Tickets are $6 at the gate. Because this is an IHSAA event, no passes will be accepted. Go Vikings! Beat Penn! Again!

The boys’ and girls’ cross country teams competed at New Prairie High School for the third consecutive week in the IHSAA tournament. The girls’ came away with a semi-state championship and the boys’ finished second. Both teams move on the IHSAA State Championship in Terre Haute at the LaVern Gibson Championship Cross Country Course.

The girls’ team outdistanced second place by 44 points. The top five runners placed inside the top 30 overall. Ava Gilliana led the way in 2nd place followed by Logan Ferngren in 5th, Emily Worthington in 17th, Sarah Worthington in 22nd, and Hannah Fitzgerald in 26th. Rounding out the Varsity seven were Julia Arnold in 33rd and Elena Kipp in 60th.

On Saturday, October 21, the Boys Cross Country team traveled to New Prairie to take part in the third step of the annual IHSAA postseason tournament, the Semi State Championship Meet. Facing off against 19 other teams and many top individuals from the northwest quarter of Indiana, the Vikings competed exceptionally well - as just about everyone on the team turned in their best performance of the year - but ultimately fell just a tiny bit short of knocking off the defending Semi State Champions from Lowell who scored 80 points to the Vikes' 91.

By virtue of their second place finish overall, the Boys' Cross Country team qualified to represent Valparaiso High School at the State Championship Meet for the 10th year in a row (the third longest active streak) and for the 44th time in the tournament's history. The Vikings remain tied with Carmel for first place on the list of all time state meet appearances, and with a finish in the top 10 this weekend, would move into second place on the list of all-time Top 10 finishes!

Anyone who would like to catch the action at the State Finals, but can't make the trip to Terre Haute on Saturday, will be able to follow the meet online as the IHSAA will be providing a livestream via their website at IHSAAtv.org.

The VHS Vikettes spent a beautiful Fall Saturday volunteering for the Fall Harvest Festival in Downtown Valparaiso. They had a great time helping children paint pumpkins, making caramel apples, and even painting faces at this free community event.

The SAAC participated in the VHS Trunk or Treat on October 26. They hosted four “trunks” and had a great time representing Valparaiso High School Athletics. Plenty of treats were handed out and fun was had by all.