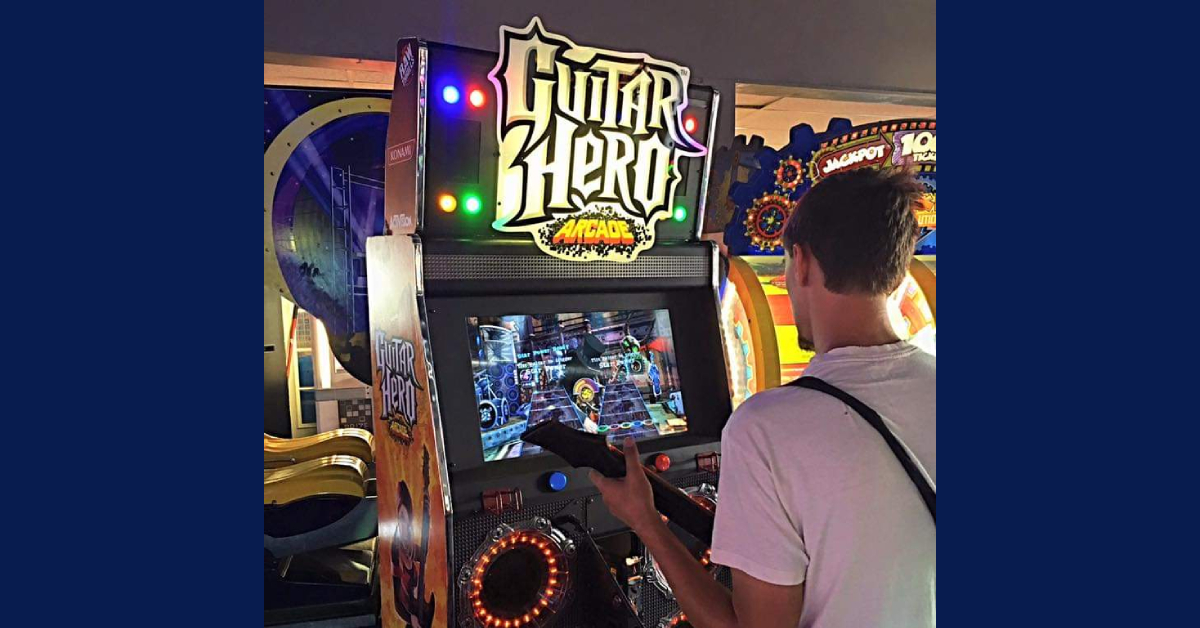 The early 2000s are known for a list of iconic things: overly colorful tracksuits, Britney Spears, so many boy bands, the heartbreaking ending of the sitcom “Friends,” phones that could be slammed on the ground without getting a single scratch. The list goes on.

What was truly iconic during that time was the rise of rhythm games—games that challenge people through music. Many of them are not as widely available anymore as they once were in their glory days, but entertainment centers like Zao Island fight to keep them alive in their arcades.

One particularly iconic rhythm game was “Guitar Hero.” “Guitar Hero” was jointly created by the companies RedOctane and Harmonix in 2005, and later sold to Activision in 2006. It was modeled off Konami’s rhythm arcade game “Guitar Freaks” which was popular in Japan at the time.

“Guitar Hero” was so successful that knockoffs and sequels started to be produced at impeccable speed. “DJ Hero” and “Band Hero” were well-beloved sequels, and the “Rock Band” series was a worthy competitor.

The “Guitar Hero” franchise has sold over 25 million units worldwide and has made over $2 billion. As if that is not enough success, “Guitar Hero 3: Legends of Rock” is claimed to be the first video game to earn over $1 billion in sales.

Sadly, “Guitar Hero” met an untimely end in 2011 when Activision discontinued the franchise. The popularity of “Guitar Hero” and everyone’s eagerness to come out with a new game similar to it meant there was an oversaturation in the market—the game wasn’t as profitable anymore. Also, after the recession, many gamers were hesitant to dump money into a game that required specific controllers that couldn’t also be used for other games.

Don’t be mistaken, the franchise may have ended, but “Guitar Hero” remains one of the most sought-after rhythm games to ever exist. In fact, when “Guitar Hero” was first released, the game bundle, which included the game and its iconic guitar-shaped controller, sold for around $70. Today, a “Guitar Hero” game bundle can cost a person upwards of $300, and that’s just to get it used.

That means the best way for a gamer to bask in the nostalgia of Guitar Hero’s glory days is to find a local arcade that still has the system. Luckily, Zao Island has the Valparaiso community covered.

If “Guitar Hero” isn’t really your thing, though, don’t worry. Zao Island is home to many iconic rhythm games that aren’t widely sold anymore such as “Dance Dance Revolution” (DDR).

“Dance Dance Revolution” started out as an arcade game in Japan and was created by the Japanese entertainment group, Konami, in 1998. It didn’t become available in the United States until 1999.

The “DDR” franchise is huge—there are at least 16 versions of the game. The version found in Zao Island is “Dance Dance Revolution Supernova” which has over 300 songs available.

“Dance Dance Revolution” has also taken many forms. Once it reached the United States it quickly developed from an arcade game to a console game and was available on many platforms such as the Playstation 2, Nintendo Wii, and Xbox 360. However, many people believe that the arcade version of the game is the best because that is how the game was intended to be played.

There is a large “Dance Dance Revolution” community. All over the world people gather to compete in “DDR” tournaments. Some aim to win simply by getting perfect scores, while others get more creative and come up with their own dances to go along with the steps of the game. Even though the game is now 20 years old, competitions are still held and people fight for world records.

As if the huge competitions aren’t enough, “Dance Dance Revolution” has also been used in many schools’ fitness programs. Because the game requires a person to move around so much, it’s a great way to show kids that being active can also be fun. Some universities even offer “Dance Dance Revolution” classes that can be taken to contribute toward a student’s credit hours.

Unfortunately, like “Guitar Hero,” “Dance Dance Revolution” has become rare. Right now there are only about 50 "DDR" machines in the United States due to Konami’s production restrictions. Most of these machines are on the East and West coasts, meaning that the Midwest hardly has any. Once again, the community of Valparaiso is lucky that Zao Island has its back.

So, if you’re looking for a place to enjoy and reminisce on some loved games of the past, then Zao Island is the place for you. And if you think these iconic rhythm games of the 2000s are exciting just wait until you see some of Zao Island’s newer rhythm games like “Piano Keys.” They’ll be sure to entertain you.

To learn more about Zao Island and its popular rhythm games,” visit https://zaoisland.net/ or go out and enjoy Zao’s in person at 1050 Horse Prairie Avenue in Valparaiso.