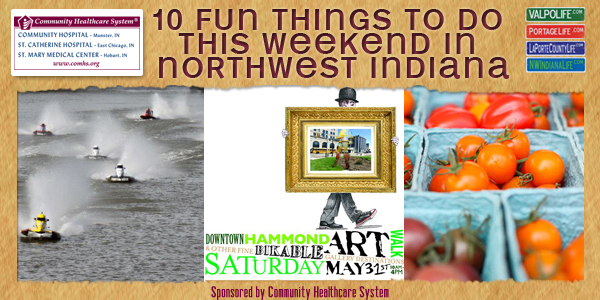 Each week we bring you 10 Fun Things to Do in Northwest Indiana so you are never without something to do! This weekend we have some great events across the region, with a nationally-televised triathlon, La Porte County's biggest event of the year, comedy improv, theatre performances, concerts and plenty more all taking place.

High School Comedy Troupe Serious about Helping St. Clare Health Clinic
The Crown Point High School Stray Dogs Improv Group will donate proceeds of a May 30 performance to St. Clare Health Clinic, which since 1996, has provided free medical, educational and referral services to underprivileged area residents. “Stray Dogs Improv Comedy Night,” the second of two shows the troupe performs annually, will take place from 7 to 9 p.m. in high school auditorium and feature students who must audition to be accepted into the popular extracurricular program, which has been offered since 2008.

Imagine Music Concert Series Presents Shoes
The Imagine Music Concert Series presents Shoes on May 31, 2014 at 7:30 p.m. It may not have been the hip thing to do, at the time, but Shoes carried on the true pop tradition of the Beatles and Raspberries during the late 70s and early 80s with charming innocence and execution unmatched by more derivative bands lumped into the category of "power pop." Click here to get your tickets!

Second Annual PICnic In The Park hosted by P.A.V.E. of Michigan City
P.A.V.E. (People Against Violence Everywhere) will be hosting the Second Annual PICnic In The Park. PICnic stands for Peace In The City. The PICnic is to kick off "A Month of PEACE In the City". Mayor Ron Meer will be in attendance to read the Proclamation stating the city's observance of June being PIC Month.

Chicago Street Theatre Presents: Rabbit Hole
Chicago Street Theatre is proud to present Rabbit Hole by David Lindsay-Abaire. Performances are Friday and Saturdays at 8 PM with a 2:30 PM Matinee on Sunday, June 1. The play is directed by CST veteran actor and director David Pera and features the ensemble cast of Mary DeBoer (Valparaiso), Dean Perrine (Chesterton), Barbara Malangoni (Valparaiso), Carly Smith (Pines) and Jacob Barber (Crown Point). Despite the subject matter of Lindsay-Abaire's play, the drama is a heartwarming story told with lots of humor and hope as the family works through their grief.

3rd Annual Hammond Art Walk Features 12 Destinations!
The third annual Hammond Art Walk will feature twelve art destinations this year. We welcome you to visit from 10AM til 4PM on Saturday, May 31st. Each venue is a unique space, reflecting the limitless creativity of the visual arts. Each year we open our doors together for the Art Walk to give visitors a glimpse of the emerging and expanding art community in Hammond.

The South Shore Orchestra Kicks Off 10th Anniversary Season with Free Chamber Concert
On Saturday, May 31, the South Shore Orchestra (SSO) will raise the curtain on its 2014 - 2015 “Imagine” season with a free concert saluting the ensemble’s chamber music roots. The concert, entitled “Carnival of the Musicians,” will feature a whimsical lineup of duos and trios performed by the musicians who have helped shape the SSO’s 10-year legacy.

11th Annual Duneland Exchange Club Frog Hunt
The Duneland Exchange Club is hosting their annual Frog Hunt at Sunset Hill Park this Saturday. I am hoping you can help promote this great event. It is one of only two fund raisers we participate in. It is a family fun event being held in conjunction with the Celebration of Wildlife.

Bullpen Winfield Re-Grand Opening!
Join us for our huge outdoor Re-Grand Opening event! Admission is free and there will be food, drinks, games and an All-Star lineup of the area's best live entertainment!