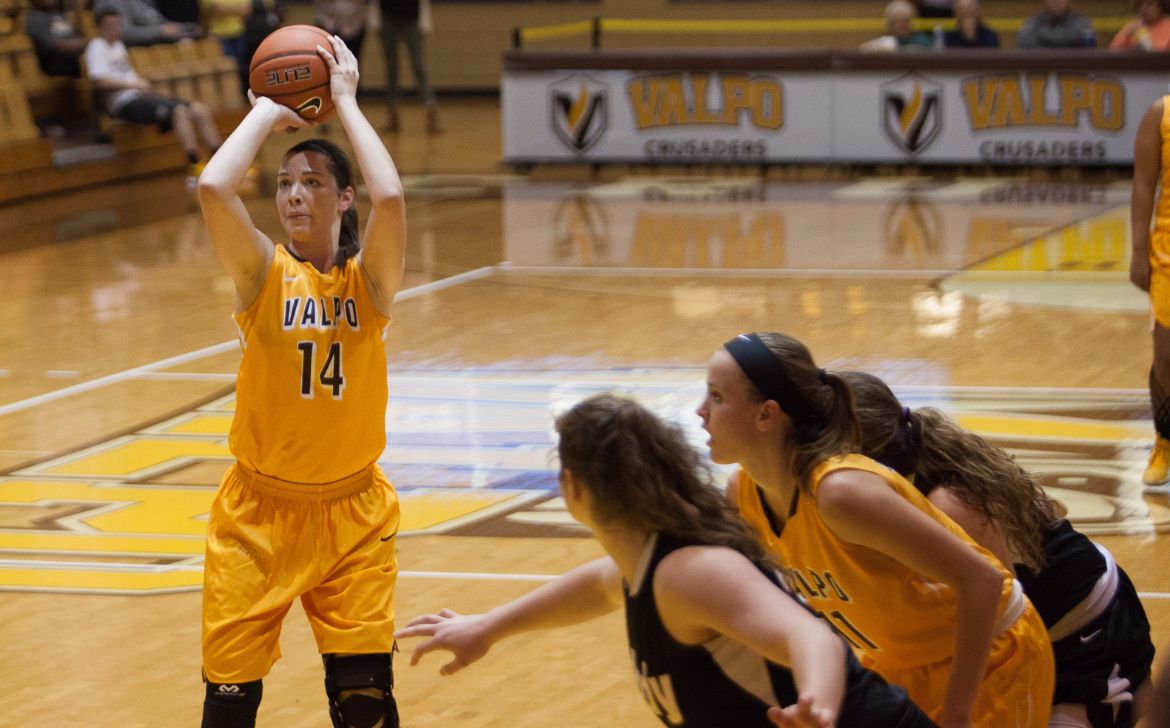 Women’s Basketball Team Tops Indianapolis in Exhibition Opener
A long wait came to an end on Thursday night at the Athletics-Recreation Center, as the Valparaiso University women’s basketball team took the court for game competition for the first time this season. The early taste of hoops was an enjoyable one for the Crusaders, who toppled Indianapolis 60-51 in exhibition action.

“At one point I looked out there and we had four freshmen on the court together,” Valpo head coach Tracey Dorow said. “I was like, ‘Wow, that wasn’t the plan, but they’re doing a nice job.’”

The performance of the newcomers provided reason for enthusiasm, but the contributions came from familiar faces as well. None are more familiar than junior Dani Franklin (Cedar Rapids, Iowa / George Washington), who paced the team with 13 points on 5-of-12 shooting and 2-of-3 from beyond the arc. Amber Lindfors (Elk Grove Village, Ill. / Elk Grove) scored eight points and pulled down 11 rebounds, six of them coming on the offensive glass.

“We got some key boards when we needed them,” Dorow said. “You look and we had one person in double figures. We didn’t score a ton of points, and the biggest key is that we have to clean up the turnovers. We’re young and we’ve got a long way to go still, that’s what exhibitions are all about.”

The Crusaders overcame 24 turnovers by forcing 22 of their own. They limited the Greyhounds to single-digit point totals in the second and third quarters.

Now, the games start counting as the Crusaders tip off the regular season against Stetson on Saturday, Nov. 12 at 6 p.m. in DeLand, Fla. Links to live coverage will be available on ValpoAthlietcs.com.

Schorsch, Emhardt Swing Epic Upset of Top Seed, Advance to Quarterfinals
The Valparaiso University men’s tennis program has enjoyed its fair share of memorable moments during its recent resurgence, including a Horizon League title and trip to the NCAA Tournament a year ago.

But Thursday may very well stand all alone atop the list of significant days in program history. Seniors Jeffrey Schorsch (Perrysburg, Ohio / Perrysburg) and Charlie Emhardt (Carmel, Ind. / Carmel), who have already long established themselves as the best doubles combination in program history, added yet another unforgettable chapter to their ever-growing Valpo legacy.

Schorsch and Emhardt took down Cal’s Filip Bergevi and Florian Lakat 7-5, 4-6, 1-0 (9), upsetting the top seed in the second round of the USTA/ITA Indoor Intercollegiate Championships at the Billie Jean King National Tennis Center in Flushing, N.Y.

Bergevi and Lakat were ranked No. 2 in the nation in the most recent ITA Division-I Men’s National Doubles Rankings.

“It has been an unbelievable day,” Valpo men’s tennis coach Jim Daugherty said. “Jeffrey and Charlie are playing some big-time tennis right now. Both wins today were huge and the win over Cal has to be the biggest doubles win in program history. I am so proud of those two. They were so tough down the stretch.”

The Valpo duo, which earned entry into the tournament via the USTA wildcard, was down to match point in the third set, but came through with two return winners and then served out the match.

Schorsch and Emhardt opened the event on Thursday afternoon with a 6-4, 6-4 first-round win over Denver’s Alex Gasson and Yannik James, a doubles team ranked No. 42 in the nation. That set the stage for the memorable match with Bergevi and Lakat, who had received a first-round bye.

Three of the top four seeds were knocked off on Thursday, leaving the national title wide open with eight doubles pairs remaining. Now, Schorsch and Emhardt turn their attention to Ole Miss’s Fabian Fallert and Grey Hamilton, who they meet in the quarterfinals on Friday at 2 p.m. Central Time. Fallert and Hamilton are coming off a 6-4, 6-4 win over North Florida. Valpo can move to Saturday’s semifinals with a win on Friday afternoon.