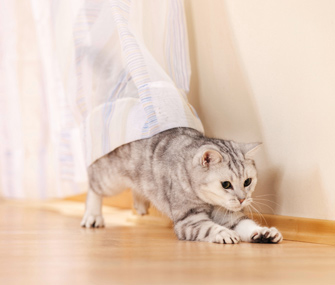 Cats chase. It’s what they do. Being born predators, they normally go after small prey or toys that mimic prey or maybe each other for fun and practice. But why would a cat chase a human?

“I’ve had a lot of owners come in with wounds from their cats playing with them inappropriately,” says Sharon Crowell-Davis, DVM, DACVB, professor at the College of Veterinary Medicine at the University of Georgia. “We sometimes encounter a behavioral problem in cats when they’re confined to a house and don’t have adequate or appropriate opportunities for play," says Dr.Crowell-Davis. "They discover the game of chasing the human and pretend that a leg is a mouse or other prey and jump on it and try to ‘kill’ it.”

When Play Is Fun
What if your cat doesn’t pounce for the kill but just occasionally gives chase when you, say, carry the dishes into the kitchen? “If your cat simply chases you and stops short, she has discovered a very functional form of play,” says Dr. Crowell-Davis. “It’s an inhibited and modified form of hunting behavior. So when she’s in that mood, that would be a good time to grab a ball and toss it and roll it since she is wanting the stimulation.” The same applies to stalking too, as long as it remains play behavior and doesn't end with an attack. “If you have a cat who tends to follow you around the house — walking, stalking or chasing — then you’ve got a cat who is fairly attached to you socially and wants to be near you because of that social attachment.”

Dr.Crowell-Davis also notes that cats like to play tag. “At my home I have a large fenced outside area for my cats, and I frequently see them playing tag,” she says. “Sometimes when my daughter is in the backyard, she’ll engage in that game of cat tag. Everybody runs around and jumps and takes turns chasing each other.” Dr. Crowell-Davis admits that the rules of cat tag are not identical to human tag, but the results are the same: fun! “Especially when four or five of my younger and more energetic cats start playing,” says Dr. Crowell-Davis. “One cat will charge another, and then another cat will jump into the air, and the one that jumped first will run away, and the one that jumped next will run after it...that is a normal form of feline behavior.”

Click here to read more from vetstreet.com about cats at play!