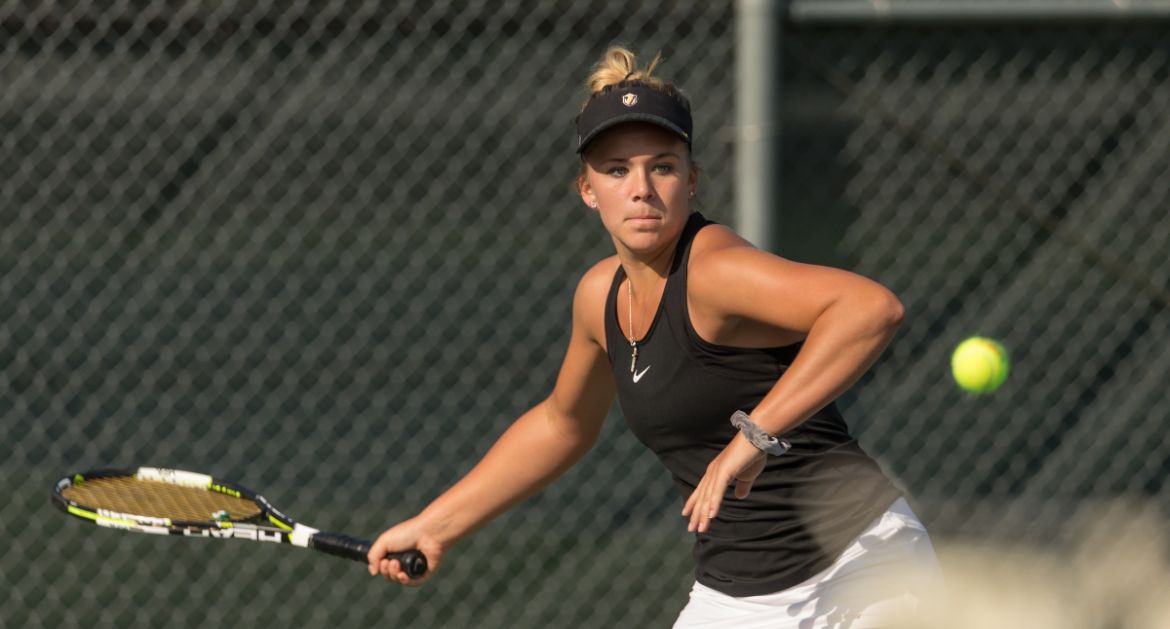 After a fall season that saw the team go a combined 44-22 (.667) in singles and 16-11 (.593) in doubles, the Valparaiso University women’s tennis program will look to sustain its recent success with the dual match season on the horizon.

The program has displayed significant progress since head coach Tammy Cecchini took over. Valpo finished the 2017-2018 campaign with the program’s highest win total since 2006-2007 while combining for 73 singles wins and 38 doubles victories. The team won six Missouri Valley Conference weekly honors after having two weekly awards in 2017, none in 2016, one in 2015 and before that none since 2008.

The spring slate gets going on Sunday as Valpo visits Toledo at 2 p.m. with hopes of beginning another strong campaign.

Two years ago, Wind racked up 11 singles victories – at that time the most by a Valpo women’s tennis player in a decade. This fall, she was part of a doubles pairing that took second in Flight 2 at the MVC Individual Championship.

Modesto is another experienced player who has excelled in high-pressure situations. She pulled out the decisive victory over Green Bay for a 4-3 conference win in 2017. Modesto and Wind teamed together last season for a No. 2 doubles victory against Missouri State, helping Valpo take the doubles point from the opposition for the first time in Missouri Valley Conference play.

“They bring a sense of confidence to the rest of the team because they’ve been around the program for four years,” Cecchini said. “Neither of them want this to end. They understand that this is it for them, and they’re practicing harder than ever and putting in more hours on and off the court.”

Kopfer finished as the runner-up in Flight 7 Singles at the MVC Individual Championship this fall and completed the fall campaign with a glowing record of 7-1. As a member of the physician assistant program, Kopfer will not be able to play tennis during her senior season and will instead stay on as a team manager, making this the final competitive go-around for the Valpo junior.

“She’s playing incredibly well and I’m so proud of her,” Cecchini said. “She’s displaying a high level of confidence. She was my first recruit as a head coach, so she owns a special place in my heart. I’m so excited to see her put it all out there in her last semester of tennis.”

Sysouvanh helped earn an MVC Doubles Team of the Week award early last season. She finished the year by notching a doubles victory over Stony Brook in the MVC Tournament.

“Dao has changed so much since her freshman year,” Cecchini said. “She used to have a lot of anxiety, but now she’s extremely relaxed and comfortable. She trusts me as a coach and she trusts her teammates. She’s a great leader and she’s playing great tennis right now in both singles and doubles.”

Vujanic, who is currently battling an injury, won the MVC individual crown at No. 1 singles and won four matches in the ITA Midwest Regional including one in the main draw against a player from Michigan State.

“Jelena came back for her sophomore year and had matured a lot,” Cecchini said. “She has become a team player and part of the team. She was finding her place as a freshman and has learned how to be a great team member. That really showed in her results this fall. Her confidence has skyrocketed.”

Claire Czerwonka (Kenosha, Wis. / Saint Joseph Catholic Academy) is Valpo’s other sensational sophomore. She totaled 14 singles wins and a team-high 15 doubles triumphs while playing No. 1 singles and doubles as a freshman a year ago. She has already scribed her name into the Valpo record book as her doubles win total placed her in the Top 10 in single-season program history.

Czerwonka was part of the third-place doubles team in Flight 1 at the MVC Individual Championship this fall and placed fifth in Flight 2 singles.

“Claire’s serves are amazing,” Cecchini said. “She’s coming back stronger this season. Her and Jelena went to Florida together and trained there. Claire is striking the ball solidly and looking so confident. She has worked on her volleys in the offseason. She’s playing extremely well.”

Freshman
Isabella Schoolcraft (Bargersville, Ind. / Center Grove) made it to the final day of the MVC Individual Championship this fall, placing third in Flight 6 singles.

She’ll look to build on a 6-1 record from the fall during her rookie spring season.

“I’m excited to see what Isabella can do,” Cecchini said. “This will be her first taste of playing team dual matches, so I can’t wait for her to see what it’s going to be like and continue her development over the course of the spring.”