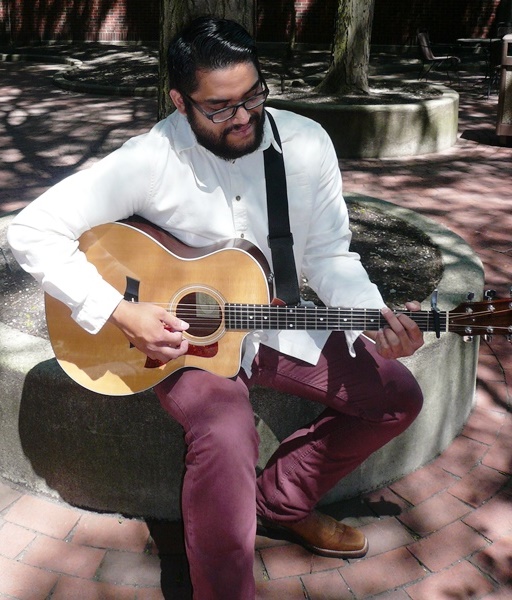 A chance meeting with a Franciscan Alliance employee helped musician Eliezer Hernandez, of Hammond, realize a goal of giving back to the community.

During their conversation, Hernandez, who says, “call me Eli,” learned that Franciscan Alliance raises funds and accepts donations to support numerous programs within the four-hospital, local health care system. As a result, he asked how he could help pediatrics patients and was connected with the Franciscan Alliance Foundation, the system’s fund-raising arm.

Hernandez, an unassuming 26-year-old who plays guitar, sings and has a passion for songwriting, was taught to play by his family so he could participate in church musical services. By senior year of high school, he was composing tunes.

“The first song I wrote was to impress a girl in high school,” he said, adding, “I got a date from that song.”

Now, he has written more than 50 originals, one of which is standing out from the others.

“My Favorite Superhero” was inspired by television commercials that depicted hospitalized children. Hernandez said it was his wish that it could bring them hope in face of illness. His dream was to travel to the hospital he saw on television and perform the ballad for the patients. When that was not possible, he was able to raise money from the song and donate the proceeds to various pediatric care efforts.

Program manager Marge Gee showed him around the facility where Hernandez was able to see the help it provides, including a therapy pool, occupational therapy rooms, speech labs and other resources available for outpatient pediatric rehabilitation.

“I had no idea there would be a waiting list to receive outpatient treatment,” he said. Gee explained the need for such services is in demand and that Franciscan Alliance strives to help as many patients as possible.

After the visit, Hernandez decided to direct to the Franciscan Alliance Foundation the proceeds from “My Favorite Superhero” to benefit children who are pediatrics patients in the aforementioned program.

“I want to keep my donations local, and make a stronger impact in my own community, he said.”

A refrain from the song symbolizes Hernandez’s mission to make a difference by encouraging young people who are in need.

It says:
It’s you, and you may not know
All the superpowers that you hold
And every superhero that I know
Wants your autograph and to call you on the phone
To ask you how you got so super strong all on your own,
It’s you.

The song is available for purchase on ITunes and Google Play.

For more information on how to support pediatric rehabilitation at Franciscan Alliance through a gift, contact Englert at (219) 661-3401, or visit www.givetofranciscan.org.