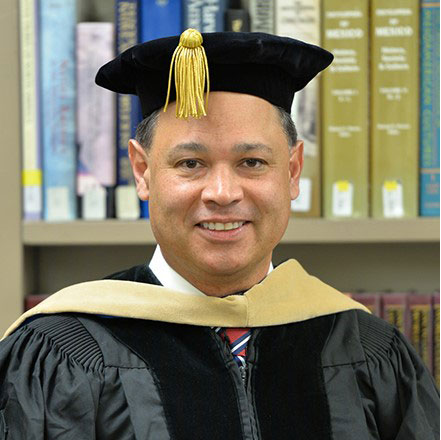 Steve Varela, a Professor at Calumet College of St. Joseph, was born and raised in the southside of Chicago where he attended Thornton Fractional South High School in Lansing, Illinois. Steve then continued his education at South Suburban College in South Holland and Depaul University where he obtained a bachelor’s of science degree in computer science. He then received full funding to stay at Depaul as a graduate assistant and earned a master’s of science in computer science.

From there, Steve had taken on a full-time job with AT&T as a national account manager, in which he spent 5 years doing. Steve then volunteered with AT&T to go overseas to Santiago, Chile to help emerging telecommunication companies develop competitive markets around the world.

“In Chile I was showing them what it was like to price services differently instead of having standard government rates for long distance rates specifically for businesses,” said Steve.

Steve then switched to Motorola and helped them launch an international satellite program, which included the Iridium global satellite program that was launched in 1998 and provided cellular coverage to many locations across the western hemisphere.

“Motorola had a lot of expertise in designing technology, but they did not in running a telephone company, which is why they tapped into my experience and experience I had with AT&T. So I helped them set up business offices across South America, with the headquarters in Rio de Janeiro, Brazil in the late 1990s.”

Once 2000 came around, Motorola was looking for ways to cut costs and sold the international division to an international company, which left Steve without much to do. Steve then started a commodity export business and began doing some teaching in Brazil.

“At this time, I got married. My wife and I wanted to raise my children in both the Brazilian and American culture, and so one way to spend a fair amount of time in both cultures was to become a teacher. Teachers have about 4 months a year to be free, which is when I decided to get involved full time in education,” said Steve.

Steve then got his master’s in business from Thunderbird University, and was offered a position as an assistant professor in the International Trade Department at a Taiwanese University, which he did for 4 years.

“That was a really good experience, in fact, my wife and I had both of our children in Taiwan while we were there. I also researched my PhD work in Taiwan. However, I was looking for a little entrance back into the United States because my kids would be school-aged within a few years, and Kansas State had a business professor position open in the interior of China at an International University, so I moved from central Taiwan to interior China and took that job.”

Steve worked in China for 2 years as a visiting professor and taught thousands of different Chinese students. Steve then really wanted to get back to the United States so his children could get schooling here and found a position at Northeastern University in Boston with the international student program, which took him to Nigeria.

Nigeria was not the safest place for Steve, nor his family, and decided that he wanted to move back to his home in New Carlisle. From this point, Steve took a job as the Director of the Undergraduate Business Management Program at Calumet College of St. Joseph.

“I have ran the Undergraduate Business Management Program for the last 2 years, and then I was asked to also run the International Program, and I have been doing that since last August,” stated Steve.

On top of being the director of 2 programs at Calumet College of St. Joseph, Steve also teaches a handful of courses as well.

Steve’s favorite part about his job at Calumet College of St. Joseph is having the flexibility to be creative and working with students.

“My favorite part about my job is having the flexibility to be creative... working with international partnerships allows you to kind of easily forge new paths. There is a lot of creativity and lots of chances to have to put your mark on something and to build something and to launch it, so there is a lot of ownership there and that is rewarding. Plus, working with students, you get to help them in very critical parts of their lives while they are trying to figure out what they want to do. A lot of globally-minded students come to me to ask for advice and tips on how they should get started with their career, and that is also very rewarding.”

Outside of teaching, Steve is heavily involved in the community in a handful of ways. Steve is the Vice President for Hudson Lake Conservation Association, an executive board member for the Northwest Indiana World Trade Alliance, serves on the parish for St. John Kanty, and is also on the Sewer committee to try and bring sewers to Hudson Lake, which is a septic and well community.

A few hobbies that Steve enjoys doing in his free time is skiing and snowboarding. He is currently a candidate to be a member of the National Ski Patrol.

“If I snowboard just right and can rescue people off the side of the mountain, then they will accept me as a full member this summer.”