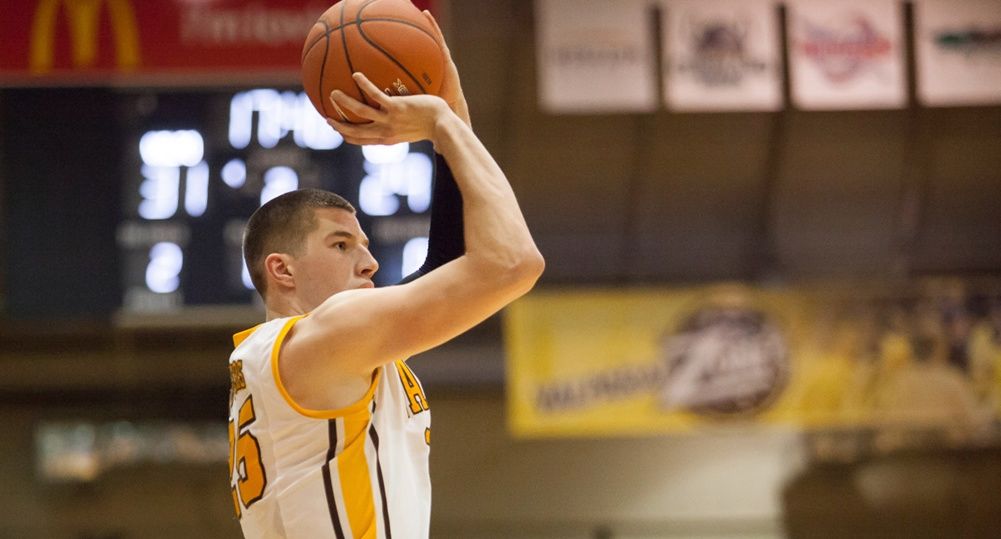 The Valparaiso men’s basketball team moved one step closer to its second Horizon League Championship trophy in three years on Saturday night at the ARC, ending the game on a 7-2 run and earning a 60-55 victory over fourth-seeded Cleveland State to advance to the league tournament championship game. Valpo will take on second-seeded Green Bay Tuesday night at 6 p.m. CT at the ARC for the right to represent the Horizon League in the 2015 NCAA Tournament. The Crusaders set a new program record as well on Saturday, winning their 27th game of the season.

The Crusaders never trailed in the second half on Saturday, but it was tight nearly the entire final 20 minutes. Never was the game tighter than after a step-back 3-pointer by CSU’s Trey Lewis with 2:07 to play, a shot which tied the game at 53-53. Valpo came down and took advantage of a second-chance opportunity, as junior Darien Walker (Chicago, Ill./Simeon [John A. Logan/Arizona Western]) split a pair of free throws. Walker then came up with a huge defensive play, drawing a charge with 1:11 to play on Lewis to give the ball back to the Crusaders.

Valpo ran the shot clock down nearly all the way before giving the ball to sophomore Alec Peters (Washington, Ill./Washington) on the left wing at the 3-point line. Peters eschewed the 3-point shot, instead taking the ball all the way to the rim and laying it in with 41 seconds to play to make it 56-53 Crusaders. The sophomore then hit the boards on the other end, grabbing a Lewis miss with 17.4 seconds to go while being fouled. Peters came down and calmly hit both free throws, capping a 22-point night and pushing the lead to five points.

On the other end, CSU’s Anton Grady knocked down an inside shot while being fouled to cut the lead to 58-55. Grady missed the free throw and the Vikings had a chance to go for the tie after grabbing the offensive board, but senior Vashil Fernandez (Kingston, Jamaica/Princeton Day [Md.] Academy) blocked Lewis’ attempt at a layup and the ball went out of bounds to the Crusaders with 3.5 seconds remaining. Following an inbound to sophomore Jubril Adekoya (Tinley Park, Ill./Andrew), he was fouled with 2.5 seconds to go and hit both free throws to cap the scoring.

Valpo led by two at the half, 29-27, following a back-and-forth first half. Walker scored the game’s first seven points in a span of just 1:13 to force an early CSU timeout, but the Vikings went on a 10-2 run to claim their first lead less than four minutes later. An 8-1 spurt by the Crusaders over a four-minute span pushed Valpo’s edge to 22-15 with 5:52 to play in the half. CSU would again rally, however, taking a one-point lead on two occasions late in the period. But a triple by Peters with 16 seconds to play in the half gave Valpo the lead into the locker room.

It took the Vikings just 17 seconds into the second half to tie the game, but Valpo would strike quickly back, as a Peters triple capped a 7-2 Crusader run with 16:08 to play and forced a CSU timeout. Later in the half, after the Vikings had rallied to tie the game at 37-all, Valpo reeled off an 11-2 run over a span of four minutes. Junior Keith Carter (Maywood, Ill./Proviso East [Saint Louis]) finished off the run with a 3-pointer, giving the Crusaders a 48-39 lead with 8:39 to play. But out of the Vikings’ timeout, Valpo surrendered a 14-5 run over the next six-plus minutes, culminating with the Lewis triple which tied the game late and set up the game’s closing stages.

Peters led all players, putting together his 11th effort of at least 20 points on the season. The sophomore was 6-of-12 from the floor, including 3-of-4 from downtown, and hit all seven of his free throw attempts while also tying for team-high honors with eight boards. Walker added 12 points and eight rebounds as well, while Fernandez scored eight points and blocked three shots.

Cleveland State (18-14) was led by Grady, who finished with 20 points, 11 rebounds and six assists. But Lewis and Charlie Lee, who entered the game averaging a combined 29.3 ppg, finished with just 20 points total on 7-of-20 shooting.

Valparaiso (27-5) will face Green Bay, which dispatched UIC in Saturday’s first semifinal, on Tuesday evening at the ARC, live on ESPN at 6 p.m. Tickets are available now online, and as always, the game can be heard live on the Valpo Sports Network. Links for live coverage will be available at ValpoAthletics.com.