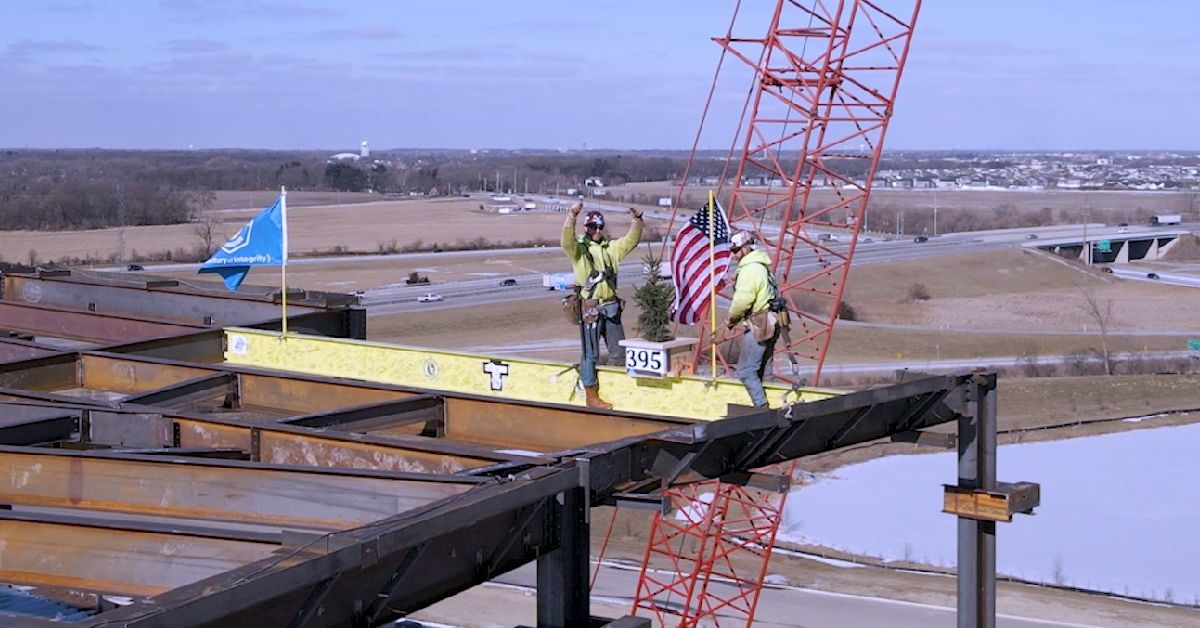 A crane hoisted a yellow beam skyward in the winter sun, marking a milestone in the construction of Franciscan Health Crown Point’s new hospital at Interstate 65 and U.S. 231.

The recent Topping Off Ceremony celebrated the last of the structural steel that will shape the $200 million hospital, which will open in 2024. Jason Middleton, vice president of administrative services at Franciscan Health Crown Point, said, “This is a special day. This is the final beam going up into the hospital.”

Father Tony Janik, OFM, director of spiritual care at Franciscan Health Crown Point, blessed the beam with holy water, saying, “As we raise this beam, we know that we are dedicating ourselves again to commitment to continuing Christ’s ministry in our Franciscan tradition.”

The beam was transported from the current hospital, where staff were able to sign it. Sister Ann Kathleen Magiera, OSF, vice president, mission integration for Franciscan Health Crown Point, Dyer, Hammond and Munster, said two blessed holy medals were attached to the beam. “One is of St. Joseph the patron of workers, daily imploring him to protect all as they continue making progress on the building, and to continue his protection of all who work within our Franciscan facilities. The second medal is of our foundress Blessed Maria Theresia Bonzel. We beg her continued intercession as we strengthen our Franciscan ministry.”

Daniel McCormick, MD, president and CEO of Franciscan Health Crown Point, reflected on those beginnings in remarks on what the new hospital will mean to the Region. “As I said at the groundbreaking, this isn’t about a building, it’s about beginning a new age for healthcare in Northwest Indiana. This building reaffirms the commitment the Sisters of St. Francis of Perpetual Adoration have made to our communities since arriving in Lafayette from Germany in 1875,” he said.

Crown Point Mayor David Uran said Franciscan Health has been the largest employer in the city for decades, adding that the opportunities for other physicians and ancillary medical facilities in Crown Point will “make this the best location for medical services, not only in Northwest Indiana, but also the Chicagoland area.”

Jon Gilmore, president and CEO of Tonn and Blank Construction, said, “It has been 479 days since we started to move dirt out here. Although we still have a long way to go, we have made great progress.”

Gilmore said Tonn and Blank workers had already moved more than 9.5 million cubic feet of soil, poured 1,500 truckloads of concrete and erected more than 10 million pounds of steel. The process includes unique offsite construction, where exam rooms, bathrooms and electrical distribution rooms will be built and fully finished at Tonn and Blank’s offsite facility, then delivered to the worksite.

“Thanks to our highly skilled workforce, coupled with the latest in virtual construction technology, we are able to do things on this project like this that were never possible in the past,” Gilmore said.

Josh Schoon, Tonn and Blank’s senior project manager, praised the project’s safety record, saying, “Our primary focus every day is keeping our people out here safe. In turn, our Franciscan partners, when they take this building over, safety will be at the heart of everything they do as they treat and protect and take care of our community members through their healthcare services.”

The new Franciscan Health Crown Point hospital is the centerpiece of the project at the southeast corner of I-65 and U.S. 231 that includes the expansion of Franciscan Health Franciscan Point and a doubling in size of the existing University of St. Francis campus. Approximately 250 acres is reserved for residential development, and Tonn and Blank Construction will be developing an additional 80 acres for commercial use. A 60-acre parcel will serve as a potential home for a new Catholic high school by the Gary Diocese Schools.

To view an online video of the Topping Off Ceremony, go to this YouTube link.