If you have any interest in technology, and were not living under a rock this past week, you eagerly anticipated the news about the upcoming launch of what was rumored to be the iSlate.  Now you know it is officially the iPad, and you likely have read at least bits and pieces of reports about the cool new hardware that Apple is planning on having available in 60-90 days.

It starts out with thousands of apps, an incredible screen, wi-fi, 3G connectivity, beautiful design, and great marketing.  As you can imagine, the event on Wednesday was attended by a huge mass of media, financial watchers, competitors and partners. Some in amazement, some in hopes that Apple does not crush them like it does many of it's competitors, or throw a huge wrench in their business model, like it has for the music industry.   Of course the stock has been on a wild ride for the past year, surging from a low of about $78 last year at this time, to a recent high of $215, and then falling off a bit on the buy the rumor, sell the fact move this week, to a still incredibly high price of $191. 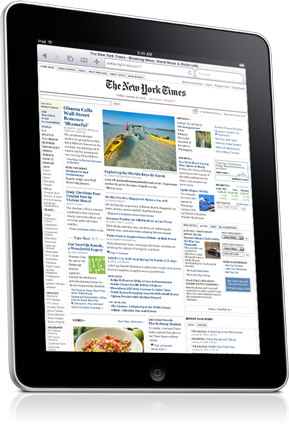 So whether you love it, loathe it, or don't care that much about the device itself, in my mind it is still an incredibly cool story about technology, a very successful company, great marketing, smooth timing, the financial markets, publishing, media, a captivating leader with vision, and pop american culture.

There's been no shortage of opinions on the iPad, for sure. Some think it's just a big iPhone that can't make phone calls, while others see it as the tablet of the future. To get into some of these points, CNET's Ina Fried and Josh Lowensohn weigh in on some of the issues.
http://news.cnet.com/8301-13579_3-10443604-37.html?tag=mncol

If you want to watch a cool video made by Apple all about the device that starts with "when something exceeds your ability to understand how it works, it sort of becomes magical".  Now don't get me wrong - I think the device is cool as hell, but if you are using that terminology, a solar calculator at Walgreen's for $5.99 would be magical then.
http://www.apple.com/ipad/#video

If you are an Apple geek, and just enjoy watching Steve Jobs smugly show off another "coolest device on the planet", you can watch the keynote speech on the Apple site.  Yes he is smug, but yes he did once again come out with another incredibly cool product that is head and shoulders above what else is out there.  Admire him or loathe him, but the guy and his company, routinely drill their competitors.

If you are a Kindle fan from Amazon, or interested in how this stacks up as an e-book reader, check out this thorough piece from zdnet.com
http://blogs.zdnet.com/BTL/?p=30226

If you want to read a "distinguished" paper go on about sophmoric humor related to the products name, and discussion of companies that will have a name issue with the device, you can check out the New York Times
http://www.nytimes.com/2010/01/29/technology/29name.html?ref=technology

If you cannot get enough through all of those means, you can go to engadget.com, one of my favorite sites for loads of detail on all things digital, here is a list of the various pieces that they have in store for you:

All I know is iWantOne.