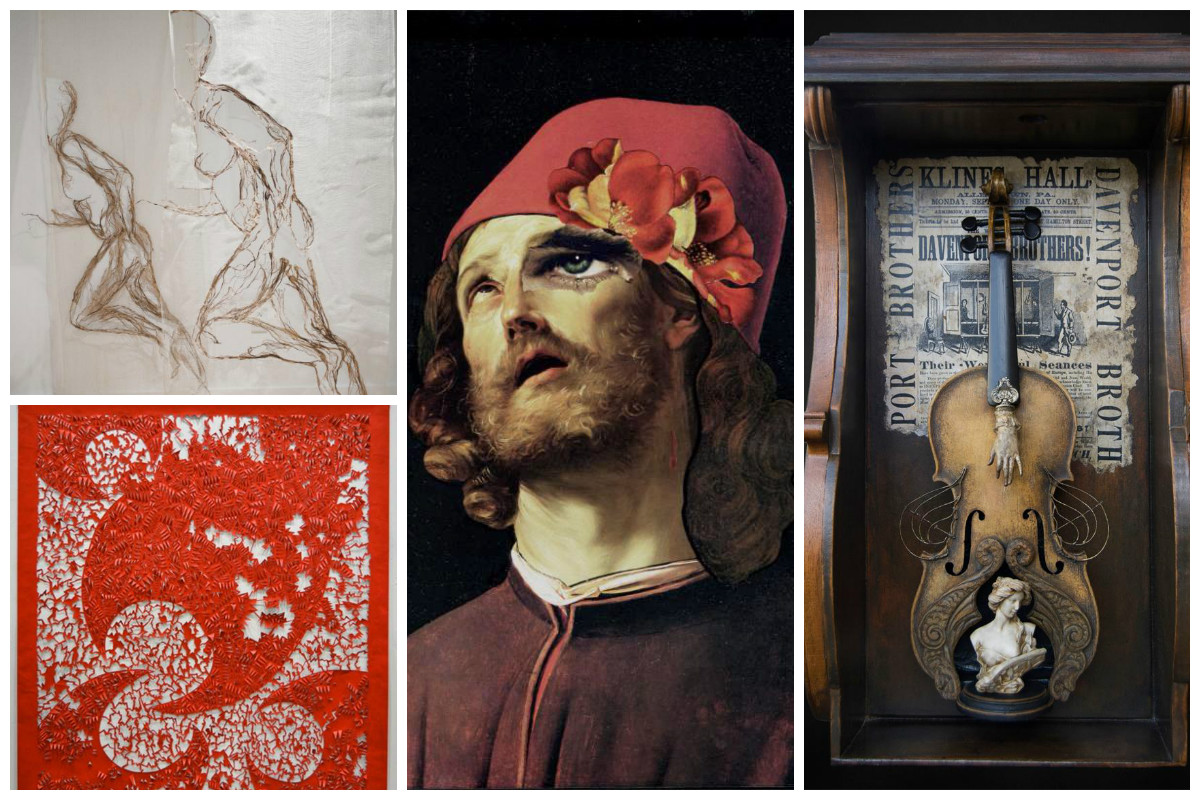 Lubeznik Center for the Arts will host the opening reception for Yoonshin Park & Richard Shipps: Out of the Shadows (Hyndman Gallery), Doug Stapleton(Brincka/Cross Gallery), and Kass Copeland (Susan Block Gallery). Meet the artists and enjoy light bites catered by Shoreline Brewery. Admission is free and refreshments are available for a nominal fee. Exhibitions opened on April 16 and will be up through June 25, 2016.

Yoonshin Park creates paper using a pulp mixture of cotton and abaca. The process of creating paper intrigues her because of the boundless possibilities for how and use it as a medium. "I strive to communicate with viewers about being fragile, fragmented and vulnerable." As an immigrant, Park uses her experience of being in a new environment to question space and its implications in defining one's identity as the inspiration behind her work. Park's Finding Space installation, with dramatic floor-to-ceiling cheesecloth panels, is an investigation on the relationship between an anonymous individual and surrounding space. This piece is based on her personal journey as a foreigner in various places. Also on view will be Park's Remnant series where she uses a pulp mixture of cotton and abaca to shape figures. Parks states that the title of her Tied installation "is a phonetic pun on the rising tides and the paper pages bound by threads.As the water rises and falls, pages of our daily experience add and subtract to and from our memory." Using traditional book binding materials -she can incorporate handmade paper, threads and fabric-Park cuts the paper into strips, dyes them in ink, and sews them together on a sheet of starched muslin to create columns that also reference the texture and color of the lake. Park received her M.A. and M.F.A. in Interdisciplinary Book and Paper Arts from Columbia College Chicago. Her work has been exhibited nationally and internationally. She was born in Seoul, Korea and currently resides in Chicago, Illinois.

Richard Shipps has long been fascinated by the interplay of light and shadow and how that interaction reveals form in many interesting ways. Whether he is working in cut paper or steel sculpture, his work is a subtractive process, removing a cut shape to reveal other shapes in a framework of both positive and negative space. Shipps states, "My process is marked by a series of parameters. By creating simple design rules, I am free to explore infinite variations of image rhythms and patterns within those constraints. After the initial cuts have been made, the work pretty much tells me what to do. In that dialogue, I just become the willing servant holding the knife." Shipps studied at Albion College, Detroit Society of Arts & Crafts, and Wayne State University. He began exhibiting his art in the Detroit area in the 1960s. Simultaneously, he began working in creative production. As an artist/designer/producer he applied himself to film & video animation. In 2006 Richard moved to Chicago, where he currently resides, and re-focused his fine art discipline. He has participated in Artprize for several years, exhibiting large scale cut paper work. His work has recently been exhibited in several venues in Europe, and a variety of exhibitions in the US.

The upper-level Brincka/Cross Gallery features Signatures of All Things by artist Doug Stapleton who re-configures found images into ambiguous narrative collages that often refer to the original source, but alters the message. He states, "my intent is to find a new person within the historic or archaeological record-someone who wants to break from the confines of stoic stone or respectful portraiture." Using his background in anthropology and art history, Stapleton is able to use his knowledge to construct his collages. "I play loosely with symbols and metaphors from art history, language, and religion to create new images that are strongly representational, with an attention to precise cutting and visual consistency, and a nod toward absurd, implied narrative," explains Stapleton. Stapleton is Associate Curator of Art with the Illinois State Museum Chicago Gallery and an adjunct faculty in the Interdisciplinary Arts graduate program at Columbia College Chicago. His work has been the subject of two solo exhibitions at the Chicago Cultural Center and Loyola University Museum of Art, Chicago in 2012. He received his MFA from the School of the Art Institute of Chicago in 1989, and a BA in Anthropology from University of Delaware with a minor concentration in Art History and Ceramics.

Discarded Memories, also upstairs, features Kass Copeland's recycled mixed media pieces which are re-constructed from found items from the alleys of her Chicago neighborhood and junk shops. Often returning to childhood stories and rhymes as resources, her work is rooted in this narrative foundation. Like joining words together to form a story, her pieces reveal themselves as new objects with completely separate histories, often using humor as a component. Copeland explains her process: "I create the architecture of the pieces by placing various found objects into dresser drawers. I continue to arrange the objects until, at some point, the elements start to look like they belong together." Copeland is an artist and designer who has worked in Chicago since 1995. Prior to earning her BFA from The Ringling College of Art and Design in Sarasota, Florida, she studied and apprenticed with her father, a theatrical and circus prop designer and craftsman.

In the NIPPSCO Art Education Studios you will find Michigan City Area Schools Student Art Exhibition through May 15, 2016. Impressive in both quality and quantity, this striking display of art and fine crafts includes 2-D and 3-D pieces by kindergarten through 6th grade students. This exhibit features a number of art media including paint, clay, chalk pastels, and paper.

Provided with support from South Shore Arts, the Indiana Arts Commission, a state agency, and the National Endowment for the Arts, a federal agency.