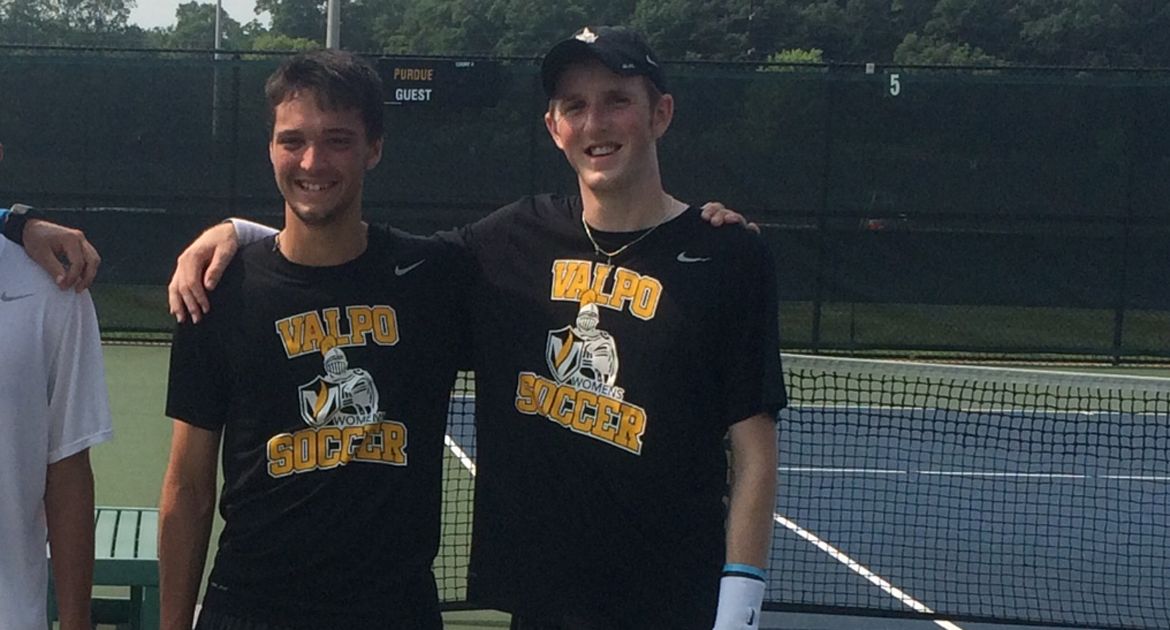 Schorsch, the top-seeded singles player, did not drop a set in any of his six victories. He expelled Western Michigan's Andrew Cahn 6-2, 6-4 in the quarterfinals in a triumph that forced a semifinal match against Emhardt, the fourth seed. Schorsch got the best of his doubles partner on the singles court, advancing to the finals by means of a 6-4, 6-1 win. There, Schorsch rattled off a 6-3, 6-4 victory over Dartmouth's Maximillian Fliegner, the #2 seed.

Emhardt made his way into the final four of singles action with a 6-3, 6-4 win over #16 Ari Gerstein of Butler in the Round of 16 and a 6-4, 6-2 dispatching of DePauw's Daniel Rodefeld in the quarterfinals.

Waak advanced to the Round of 16 in the singles portion of the tourney by virtue of straight-set wins over Lucas Jessen (St. Joseph's College) and Cameron Metzger (Rose-Hulman), respectively. His bid for a quarterfinal appearance fell short after a narrow 7-5, 7-5 defeat to Illinois' Pablo Landa, the tournament's No. 3 seed.

Doubles play saw Schorsch and Emhardt excel yet again as the Crusader tandem went a perfect 5-0 to record the title in the Men's Open Doubles. The pair opened play with an 8-0 shutout of IUPUI's Bradley Luetschwager and Matthew Moe. Schorsch and Emhardt made quick work of Case Western's Phillip Gruber/Andrew Komarov in the Round of 16, registering an 8-3 triumph.

The tandem handed Eastern Illinois' Ryan Henderson/Rui Silva an 8-2 defeat in the quarterfinals to set up a semifinals showdown opposite Butler's Ari Gerstein and Alex Woldmoe. There, Schorsch/Emhardt posted another 8-2 victory to set up a date in the finals against Christopher Fletcher (George Washington) and Robert Skolik (Eastern Illinois).

The two teams went the distance in a thrilling championship match before Schorsch and Emhardt emerged with an 8-7 (3) triumph.

Waak and Conley were awarded the eighth seed in the tournament, but fell 8-6 in their opening round tilt against Ball State's Matthew Helm/Collin Rigney. The duo responded with three consecutive 8-2 wins to advance to the finals of the consolation bracket. Waak/Conley collected an 8-3 victory over Ian Deiters (Ben Davis HS) and Elliott Thornton (The Hotchkiss School) for the consolation title.