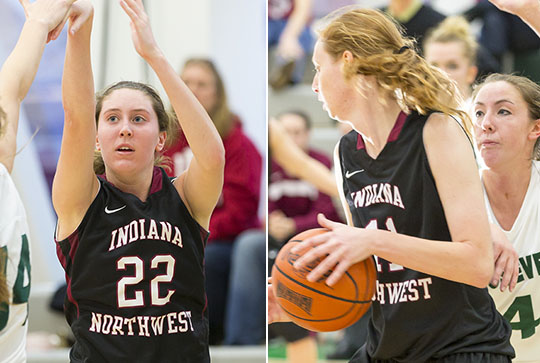 For the 2014-15 edition of the Indiana University Northwest women’s basketball team, the start of this season is all about turning the page. Last season’s RedHawks posted a number of historical accomplishments and closed out an era. This season’s squad hopes to forge its own identity.

“We’re really excited about our team. Even with the departures we had to graduation last year, and there were some significant ones, we’re not rebuilding, we’re reloading,” RedHawks coach Ryan Shelton said.

Last season’s historic marks include the second-best win total in school history (23), best home record (14-1), and third regular season conference title. With the graduations of Annmarie Keller and Brianne Wischman, among three other seniors, comes the last of the ties to the NAIA National Tournament teams in 2010 and 2011.

Replacing Holland’s scoring is a task for the whole team, Shelton said, but returning sophomore Nicki Monahan might be poised to grab a healthy chunk of the burden. Monahan averaged 15.6 points in her freshman season, while her 484 points ranked sixth all-time, trailing only her teammate Holland and Sharon Houston’s four seasons. Monahan broke Houston’s post-season record with 39 points in her first tournament game.

“I’ve put a lot of time in the offseason,” Monahan said. “I only took like a month off after the season and then got right back at it, like three to five days a week. Hopefully I’ve improved in the offseason.”

Shelton said he plans to adjust his offense to help offset the loss of inside scoring and play to his team’s strengths.

“I figured going in to this season we’d change our style of play a little bit to try to bring a little more scoring in,” Shelton said. “But at the same time we’re a program that values defense and rebounding, we always have.”

A mainstay in the RedHawks defense last season, Danielle Zandstra returns for her senior campaign. Zandstra finished tenth in NAIA Division II with 82 blocks, second on the RedHawks with 7.5 rebounds a game, and third with 6.9 points per game.

“I’m just trying to play my best in practices and show my leadership on the court,” Zandstra said. “I do have to shoot more, and keep on working on my defense.”

Also returning from last season’s squad, sophomore Brooke Gardner, who took over point guard duties mid-season after coming off a knee injury, and sophomore Bernadette Grabowski who provided Shelton with flexibility at the forward spot.

A pair of former Hobart Brickies headline a strong freshman class: Grayce Roach, who will miss the early season with an injury, and Morgan Flaherty are counted on to add scoring punch.

Shelton is also high on his three transfer students, juniors Ashley Yateman from Indianapolis, Katie McGann from Palos Heights, IL, and Kayce Nagel from Mokena, IL. Those three are expected to help support Zandstra on the front line.