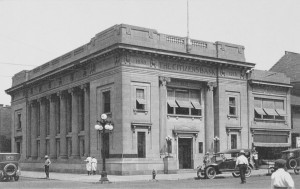 The “Roaring 20s” presented new challenges to Horizon as Public Enemy No. 1 posed a threat to the bank’s assets.

By the late 1920s, notorious bank robber John Dillinger was a household name in Northwest Indiana. He had already done time in the Indiana State Prison in Michigan City and pulled a sensational escape from the Crown Point jail armed with a “gun” carved from wood.

The threat of a Dillinger hold-up or a copy-cat robbery also prompted the Bank to mount a World War I rifle to a rail in the Director’s office above the bank lobby and teller lines.