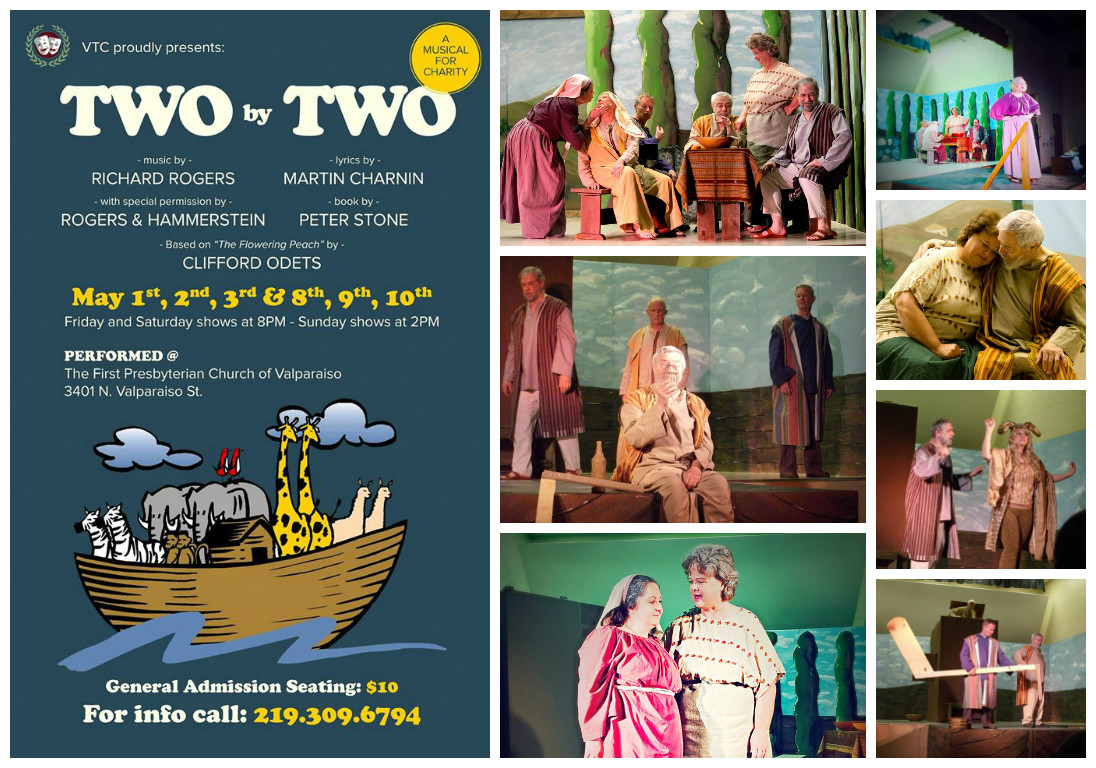 Join the Valparaiso Theatrical Company, "The Theatre that Cares," as they present a production of the Richard Rodgers musical "Two by Two." The show will be directed by Steve and Colleen Zana, with music direction by Deborah Porter and Choreography by Cathy Mertens, and will play for only six performances weekends from May 1-10, 2015. Friday and Saturday shows will be at 8 PM; Sunday matinees are at 2 PM.

Featuring a book by Peter Stone (“1776,” “Titanic”) and lyrics by Martin Charnin (“Annie”), "Two by Two" has one of legendary composer Richard Rodgers' least known scores. It is the tale of Noah and the Ark, adapted from Clifford Odets' play "The Flowering Peach" and retold with Noah and his family characterized in modern Jewish vernacular. By turns inspirational and hilarious, the audience discovers that being chosen by God for great things does not necessarily simplify the daily demands made of a father and husband. It's good fun from The Good Book and when the land has dried, man and beast alike are invited to go forth and prosper on a bright new world.

"The show is almost Mel Brooks-ish with some near slapstick moments, comedic, but touching as well," says Director and VTC President Colleen Zana. "The songs are fun and fast, but not verbatim from the Bible. It's a little tongue-in-cheek, but the tale is still familiar and relatable to all. I mean, who doesn’t feel overwhelmed on occasion by a flood of stuff? Noah just had an ACTUAL flood!”

Faces both new and familiar to regional audiences pepper the cast, with cast members from several spots across the region, from Hammond to Michigan City. The cast features Larry Hinken as Noah, Vickie Cash as Esther, Mark McColley as Shem, Becky Lieske Bongard as Leah, Ken Siegfried as Ham, Trish Neary as Rachel, Howard Brenneman as Japheth, and Ashleigh Lane Dulik as Goldie.

The production also has a unique “star” on stage; Esther gets the opportunity to wear the exact same hat worn by Marilyn Cooper when she played the character in the original 1970 Broadway production.

“We were contacted by Bill Newcott, host of AARP’s ‘Movies for Grown-Ups,’” explained Zana. “Apparently, he attended the final production on Broadway all those years ago, was allowed to keep the hat as a souvenir, and appreciated our outreach to charities, so he was gracious enough to lend the hat to us and allow us to put it back on stage for a short time. We actually have a piece of Broadway history in our humble little production!”

“Two by Two” will be staged in the Fellowship Hall at the First Presbyterian Church of Valparaiso, 3401 N. Valparaiso Street in Valparaiso, IN. Tickets are $10 general admission, with $6 of each ticket going to local charities. For more information on the production, or to place reservations for tickets, call 219-309-6794.