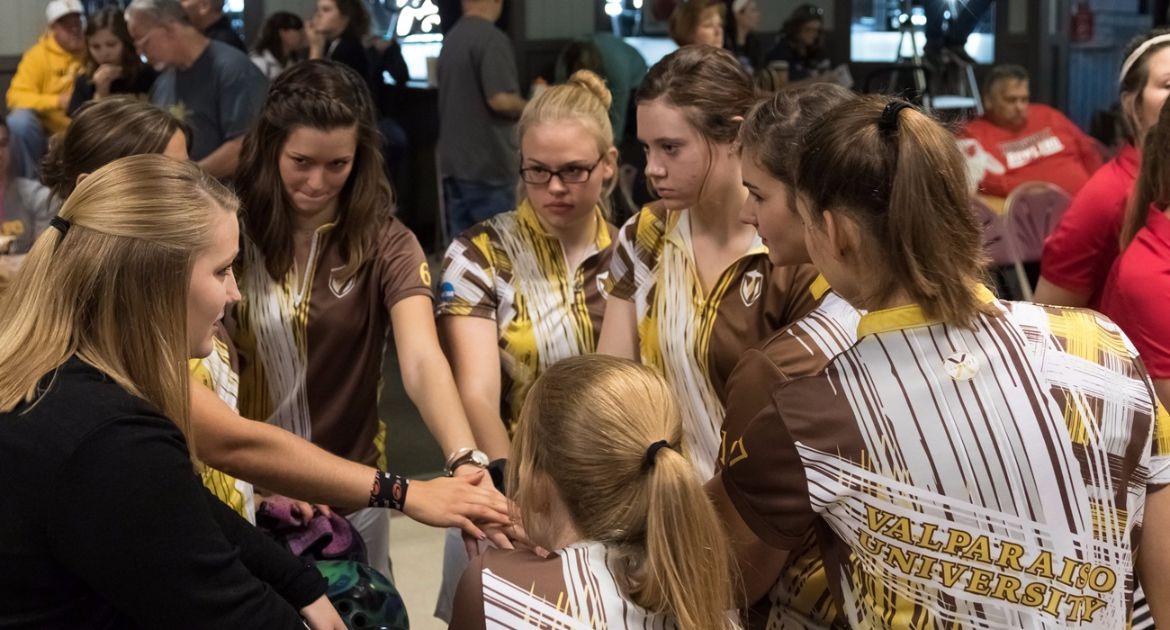 Next Up
The Crusaders (33-28) will take another month’s break from competition before returning to action as they host the Crusader Classic Feb. 17-19.

Men’s Tennis Team Releases Spring Schedule
The defending Horizon League champion Valparaiso University men’s tennis team is less than one week away from embarking on its 2017 season with the spring opener on Jan. 21 at Toledo.

The matchup with the Rockets marks a return to the courts for a team that has enjoyed tremendous recent success, including the program’s first ever Horizon League title and NCAA Tournament appearance a year ago. Valpo’s most recent match action occurred on Nov. 6, when the Crusaders were represented by Jeffrey Schorsch and Charlie Emhardt in the doubles championship match of the USTA/ITA National Indoor Intercollegiate Championships.

Valpo will look for repeat success against Toledo after bettering the Rockets 5-2 a year ago.

The Crusaders hit the road to clash with a Big Ten opponent on Jan. 28 as they face off with Wisconsin, which finished 14-9 last season. This also marks a repeat showdown from last year, as the Badgers beat the Crusaders 6-1 last with Schorsch providing Valpo’s win at No.1 singles.

The first home match of the spring season takes place on Feb. 3, when Valpo welcomes rival Butler to the Courts of Northwest Indiana. The stretch of indoor nonleague matches continues for February’s duration, as Valpo hosts Williams & Mary (Feb. 5) and travels to Western Michigan (Feb. 12) before hosting Xavier and Eastern Illinois on Feb. 17.

William and Mary went 12-0 at home last year, but 1-7 away from Williamsburg, Va. Western Michigan is the defending Mid-American Conference champion and enjoyed a 20-win season that featured a 10-0 home mark a year ago. Xavier is another quality opponent after going 12-9 overall and 3-3 in the Big East in 2016.

Horizon League play cranks up on Feb. 24 as the Crusaders begin their title defense with a home date with UIC.

This year’s spring trip takes Valpo to the Sunshine State, where the Crusaders begin competition against Rollins College in Orlando, Fla. on March 5. The Crusaders will play six matches at Star Island Resort in Kissimmee, Fla., with opponents including Mount Saint Mary’s, Grand Valley State, Duquesne, Liberty and Fairleigh Dickinson. They also play a match at Saint Leo on March 8.

After returning to the Midwest, Valpo resumes Horizon League action on March 25 at Youngstown State and March 26 at Cleveland State. The Crusaders head to Middle Tennessee State for three matches from March 31 to April 2, then have two more conference road clashes on April 8 (at Northern Kentucky) and April 9 (at Wright State).

The team returns home for the duration of the regular season, hosting Green Bay on April 14 and Detroit Mercy on April 23. The Phoenix, who finished second in the league standings a year ago with their only loss coming to the Crusaders, are under the direction of a new head coach in Tim Dean.

The Horizon League Tournament will be held in Ann Arbor, Mich. from April 28-30.

Bowling Continues Play at Arkansas State Saturday
The #24 Valparaiso University bowling team continued the Mid-Winter Invitational in Jonesboro, Ark. on Saturday with the second of three days of competition, moving up one spot in the standings.

Next Up
The Crusaders (32-26) close out action from Jonesboro in best-of-seven baker play in Sunday’s bracket competition. Valpo will open play on Sunday against Monmouth.

Next Up
The Crusaders (0-1) hold their home opener on Saturday, Jan. 21 at 2 p.m. against DePaul. The match will take place at the Courts of NWI.

Next Up
The Crusaders (5-12, 0-6 Horizon) continue a tough stretch of travel. They will return to Valpo on Saturday evening before departing for Green Bay on Monday morning. A date with the first-place Phoenix on Tuesday at 7 p.m. CT is looming next. The game can be seen on ESPN3, WatchESPN and the ESPN app. In addition, the hometown call can be heard with Jordan Morandini (play-by-play) and Brandon Vickrey (color commentary) on WVUR 95.1 FM Valparaiso. Links to live video, audio and stats will be available on ValpoAthletics.com.

Crusaders Continue Indoor Campaign at GVSU
The Valparaiso University men’s and women’s track and field teams were back in action indoors Friday evening after the holiday break, traveling to Grand Valley State University for the Bob Eubanks Open. The men took home third place, while the women came away with a sixth-place performance.

Next Up
The Crusaders travel east for an in-state meet at the Fort Wayne Duals on Saturday, Jan. 21.