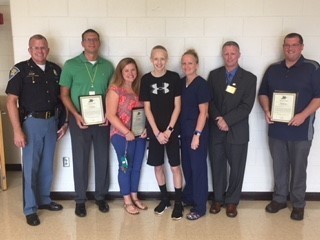 This morning the Indiana State Police were proud to present three life-saving awards to three teachers at Morgan Township School and one to a member of the Valparaiso School District who was unable to attend the event. Eric Braden, Matt Wellsand and Gaelyn Mlynarcik, of Morgan Township School, and Kevin Marine, of Valparaiso Schools, were each presented their awards by Superintendent Doug Carter during a ceremony at the office of Morgan Township. Supt. Carter praised each of the teachers for their quick thinking and heroic efforts that saved the life of Jax Whited. Jax is the son of Indiana State Police Detective Alva Whited and his wife, Antoinette.

On June 4, 2018, at 8:30 a.m., Jax was at an open gym playing basketball when he suddenly collapsed on the court. The coaching staff immediately responded to Jax and quickly obtained an Automated External Defibrillator (A.E.D.) and were able to properly use the device. Paramedics were called and Jax was transported to Porter Hospital, where he was stabilized and later flown by air ambulance to the Ann & Robert H. Lurie Children’s Hospital in Chicago. The family is grateful to share that Jax has made a full recovery. Doctors told the family if not for the availability and proper use of the A.E.D. the outcome would most likely have been tragic.

Sgt. Whited and his family would like to thank the coaches, teachers, first responders and doctors that treated Jax. Sgt. Whited would also like to encourage everyone to become familiar with how an A.E.D. works as one never knows when and where the opportunity to save a life may occur, be it the life of life of a stranger or family member.